The Cost of Consumerism 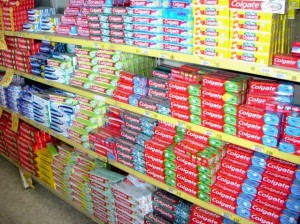 Close to 20 years ago, I had a dear friend come to the States from Belarus, former Soviet Union, to study for year. We formed a deep friendship despite language barriers. Many nights giggling over my lack of eloquence with Belarusian as she patiently taught me simple words like good morning and good night. She was a consistent source of joy and always beaming with life, however one day she came back from running errands sobbing and undone. I helped her unbind her heart and apprehensively reveal her days events. She ran to Walmart, of all stores, to purchase a simple tube of toothpaste. This was her first experience going into an American grocery store which, as I write this, seems absurd to call it that. What she came upon was nothing less than complete culture shock. She had never been faced with so many choices in her life. In Belarus, there is only one choice for a tube of toothpaste. My friend ended up coming home empty handed, but a heart full of defeat and anger. I’ve never forgotten this. For her, a simple trip to the market turned into an experience with a machine that will eat you alive if you are unsuspecting.

I was listening to NPR last week and heard an interview with Dr. Chow from the National Institute of Diabetes and Digestive and Kidney Diseases. He uses mathematics to solve everyday problems of real life. In the interview, the question was asked, “Did you ever solve the question – what caused the obesity epidemic?” and this was his answer, “We think so. And its something very simple, very obvious, something that few want to hear: The epidemic was caused by the overproduction of food in the United States.”

Dr. Chows reveals that between 1975 and 2005, the average weight of Americans had increased by about 20 pounds. So how is it possible that people are becoming obese because of overproduction and not simply because they are not exercising or have poor genetics? It starts with the food system. In the 1970’s the government swayed farmers to grow as much food as they could. Before that, they didn’t employ full production. This was due to changes in the national agricultural policy. Farms also became more generative with growth in technology and the green revolution. The green revolution began in Mexico in the 1940’s and it was a way to produce more using high yield grains with the use of fertilizers. Naturally an abundant supply drove food costs down, while the average calories available sky rocketed to 1,000 more a day! What do people do when there is extra food around? Eat it. For example, when my husband sees a sale on cereal, he’ll buy 10 boxes hoping it will last us a month. However, whether we buy 10 or 2 it only seems to last 2 weeks.

Dr. Chow states, “With such a huge food supply, food marketing got better and restaurants got cheaper. The low cost of food fueled the growth of the fast-food industry. If food were expensive, you couldn’t have fast food.” It’s undeniable that we have an epidemic here in America. With most people eating out 5 times a week, it’s no shocker that people are malnourished. But there’s also the other side of the coin. If you look at countries where there isn’t a lot of food, there also isn’t the amount of obesity. In most cases, there is starvation. One takes everything, the other takes none.

So my question is, is the cost of consumerism worth the price we pay, not just with the result of obesity, but with the lives of children who don’t make it through the night because of starvation? There is an obvious unbalance. In the 1970’s when they formed the agricultural policy allowing farmers to grow as much as they want, shouldn’t they have asked, “Should protecting the environment have priority over economic growth?” What about protecting lives?

As I reflect during this blog, a few questions come to mind. What does it mean to be a good citizen? How can I be more socially responsible? Am I being a good steward of resources? Is my consumption ethical? Every where I go I see the result of a broken system. A system that says there are no consequences for my choices. Philip Slater, a writer for the Huffington Post says, “Consumerism rests on the assumption that the economy will grow and grow forever and pay for any excesses we allow ourselves today.” Americans make up only 5% of the worlds population, yet use nearly one third of it’s resources.

I don’t want to over consume or be a predatory capitalist. So faced with this information I have to make choices and contend with my own consuming habits when it comes to food. To pay more attention to the hidden agenda in our culture and how it can pull me in like a strong wave. What can I do to change? Instead of going to Costco and buying into a belief that I need more to stock on my shelves, I will choose to simply buy enough for today at a smaller market. 25 in change has taught me that I do not need to eat as much as I think or the system tells me. If I dine out, I will ask for a take out container and put half the portion in it before I even begin to eat. I will teach my children a new system of communal consumption – a part of a larger body sharing at one table so that they can bring this into their future generations. And as June 1st approaches, I know I will wrestle with entertaining thoughts of food greed, but I want to maintain an intentional discipline of seeing food as a gift and not a right. I will continue to eat rice and beans once a week to remind me that I am not alone in the world and that all the food doesn’t belong to me.